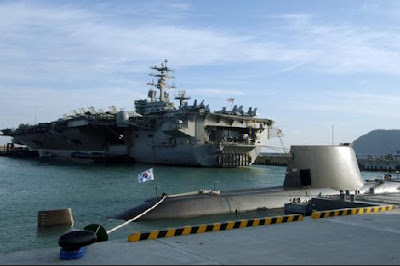 Increasing intensity, Beijing has aired its resentment and condemnation of planned joint US-South Korea naval exercises (moved already from the West Sea [Yellow Sea] to the Eas Sea in likely deferrance to China's concerns). The two powers are flexing their diplomatic and military muscles, but in a way, isn't it somewhat fair and timely for China to express its security concerns to the US?

This development may become a new dimension that will likely counter or limit US influence in the Asia-Pacific, which will lead to new military/security implications on US-Korea and US-Japan relations. Besides the opposition to US-South Korea military exercises from North Korea and peace activists in South Korea, China is now in the picture. And yes, China has gained formidable military and economic might in few decades, vis-a-vis the US, to put some teeth into what it says (definitely not a "paper tiger"), which will make the US military planners think twice before engagning in unilateralism in the Asia-Pacific. Perhaps China doesn't want to be bullied by the US anymore, as it sheds its inferiority complex brought out by Western and Japanese imperialism of 100 years ago and its self-imposed isolation during the Cultural Revolution.

If Russia and Cuba held a large naval exercise in the Gulf of Mexico near the US border, what likely response would Washington take? It would be simiilar to China's -- or more drastic and vocal. Remember the high tensions during the Cuban missile crisis? This maybe a kind of manifestation of the big powers' NIMBY (not in my backyard) syndrome. But the reality is that the Pacific is no longer the "American lake." China develops security contingency plans on Korea, as the US does the same, but the notion of North Korea becoming a possible colony of China is far-fetched.

Of course, Koreans in both south and north, need to be mindful of the big powers maneuverings and their implications for Korea (mindful of their disastrous effect on Korea during the turn of the 20th century), while developing their own strategy to promote independent and united Korea that will not be a military threat to their neighbors.