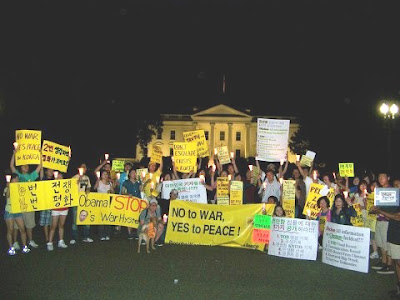 While alternative views of South Korean government's official report on the Cheonan incident are suppressed in South Korea (in the name of national security), alternative voices from overseas Koreans calling for reduction of tensions are coming to fore. The photo above shows a candlelight protest for peace in front of the White House in Washington, DC on May 30 by a group of concerned Koreans in the U.S., which received many encouragements and support from Internet readers in South Korea. Following is the statement from the protest.

On this year of the 60th anniversary of the outbreak of the Korean War, tensions are rising high in the Korean Peninsula amidst fear of a renewed conflict.

Instead of investigating further for truth on the tragic Cheonan warship sinking incident and taking responsibility for a crisis in national security, the Lee Myung-bak government has instead intensified citizen's anxieties on security and are using this incident as a mean to justify current government's policies and to take advantage on the June 2nd local/regional elections.

The inter-Korean peace structure based on reconciliation and cooperation that had been built for the past ten years has now been abrogated. Instead, tension and animosities between the two sides of Korea have intensified through escalating a war crisis mode using people's fear and anxiety on war. The spirit of inter-Korean co-existence and co-prosperity reflected in the June 15 Joint Korea Declaration and October 4 Inter-Korea Summit, has been relegated to the past Cold War era mentality and confrontation.

May 30, 2010
Washington, DC
Coalition of Concerned Koreans and Organizations in the U.S

"South Korean government should reveal the complete ship wreck to independent inspectors and allow independent investigations of the incident by experts."

- Didn't SK government arrange a team of investigators and inspectors from various countries to determine that there is sufficient evidence that a NK warhead was responsible? (Not exactly the same thing, but close enough right?)

"North and South Korea should not engage in any militray provocation or activity that will impair peace on the Korean Peninsula."

- While we are at it, how about everyone in this world chill out with the violence!

"The U.S. should stop antagonistic policy towards North Korea based on confrontation and pursue a policy of engagement and co-existence."

- (genuine question) What kind of policies?

The investigation was led by SK military, in secrecy, with few civilians and international observers added in later (with Swedish delegation "reluctantly" signing off the report). The investigation should open up to independent investigators in order to provide answers to many questions and inconsitencies.

US policy towards North Korea has been and still is based on the containment policy, rather than engaging North Korea for resolutions to contentious issues.

When you say the investigation was led by SK military in secrecy with a few sprinkles of civilian and foreign observers, are there facts/evidence to support these claims? Since I am not a native Korean speaker, it is hard to find this type of "inside" information for myself.

Can you please cite where the Swedish delegation reluctantly signed off on the report? As far as I know, here is the evidence with the list of countries involved:

"The Joint Civilian-Military Investigation Group (JIG) collected propulsion parts, including propulsion motor with propellers and a steering section from the site of the sinking. This evidence matched the specifications of a North Korean torpedo, “CHT-02D,” drawing for which were obtained from a booklet advertising North Korean weapons for export. Also, the marking in Hangul found inside the propulsion section was found to be consistent with the marking on a North Korean training torpedo retrieved in 2003.

In addition, the findings of the Multinational Combined Intelligence Task Force, that included the United States (US), Australia, Canada and the United Kingdom, found that a few small submarines and a supporting mother ship left a North Korean naval base in the Yellow Sea 2-3 days prior to the attack and returned to port 2-3 days after the attack. Since it was confirmed that all submarines from neighboring countries were either in or near their respective home bases at the time of the incident, it is quite likely that one of the North Korean small submarines was responsible for the torpedo strike. "

Isn't that sufficient circumstantial evidence to determine that it was very likely to be a NK warhead that caused the ship to sink?

You say that the investigation should open up to answer more questions. What questions remain? I would genuinely love to know.

In regard to containment policy, what is so wrong about it? Almost every single time US has engaged with NK about anything (aid, relief, trade, etc), none of the benefits have ever trickled down to the citizens of NK. Instead, the NK regime takes all the benefits, leaving their people with almost nothing. With the NK regime, you can almost tell their next move because they have been doing it for so long. When they run out of money or resources they start blowing stuff up, testing nukes, releasing statements of intent to use force, etc., until SK caves in and gives them food/relief/supplies. Then NK quiets down for awhile, until they run out again. Are you saying that is better than containment policy?

Thanks for your deep interest in this incident, as we all should be at this critical moment to avoid any mis-step or escalation by concered parties.

Here are missing pieces that observers in South Korea are demanding:

1. complete TOD visual record of the Cheonan sinking ==> initially SK government said this did not exist, then it released one segment of it (so there is suspicion that there are more that has not been revealed)

2. all communication and navigation records of the Cheonan ==> navigation record will clarify exact spot that Cheonan sank, and the depth of water at that spot may shed some light on the sinking and the reason why such a large ship sailed in the shallow area where only smaller ships venture into.

Furthermore,
4. A mystery of the Third Buoy, where a Korean diver died trying to recover a sunken object (which has not been revealed to the public) -- in a place that was near but not where Cheonan sank. Unprecedentedly, US Commander in Korea paid a direct tribute at the Korean diver's funeral.

6. The Korean alphabet marking on the torpedo seems so pristine and colorful compared to the heavily-rusted torpedo part that one is tempted to venture that the marking may have been made after torpedo part's recovery. And the marking language is different from the 2003 torpedo. A chemical analysis of the marking may shed light on this matter.

7. Initially, SK and US forces announced that there was no suspicion of NK involvement in the sinking. And it took two months for SK to release the report. If there existed intelligence of NK submarime movements at the time of the sinking, why wasn't this fact let known initially? With all the stepped-up intelligence activities occuring during joint US-SK naval exercises in the area during the sinking, are we led to believe that NK submarine was able to roam free and strike undetected in these waters that were heavily patrolled by SK and US forces?

* The mention about Swedish delegation comes from Korean observers citing a CBS news article that said "Only Sweden, which also sent investigators, is a reluctant partner in blaming the North Koreans."

This is precisely the kind of information I was looking for. Thank you very much for putting this together! And thanks for answering my questions, I really appreciate it.

It seems there is more than meets the eye here. I definitely wish this kind of information was out in the open so that people like me can be better informed.