Korea Teams at the World Cup 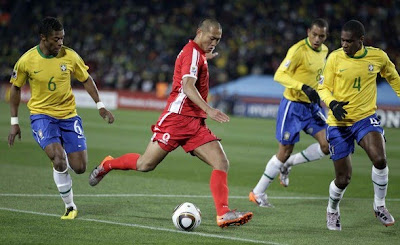 For the first time, both South and North Korean teams are playing in the FIFA World Cup in South Africa. This is South Korea's seventh World Cup foray, and the second one for North Korea since the remarkable run at the 1966 tournament in England. The two teams are playing well, as South Korean team beat Greece 2-0 and North Korea played a close game with Brazil with 2-1 loss. Normally, South Korea would also be cheering for North Korean team as it did before in international sporting events, but recent chill in inter-Korean relations in the aftermath of the Cheonan ship sinking incident has dampened the spirit.

Jung Dae-sae (photo above in red jersey), a player in the North Korean team is changing that. Jung's story is extraordinary. He was born in Japan, has South Korean citizenship, and he plays with North Korea's national team. Though Jung gained South Korean citizenship via his parents, he learned soccer at pro-North Korean school in Japan and fulfilled his dream of playing in North Korea's national team. His brother plays professional soccer in South Korea. Jung's complicated family and personal story reflects the pain of the divided Korea. While seeing Jung cry with emotions at the start of the game with Brazil, Koreans -- both in the South and overseas -- felt the yearning for Korean reunification.

I guess Jung will be on his way to the forced labor camp now. I've only perused a few pages of your blog, but I don't see much about human rights abuses in the North, how come?

Thanks for the reporting. Despite the North Korean team's collapse during the 2nd half of the Portugal match, they've won over a lot of people with their spirited play. Seems to me like cultural and sporting exchanges such as this have tremendous potential for breaking down hostilities and fostering understanding... actually helping us to see eachother as human beings. But it's unclear to me whether such "diplomacy" between civil society can effectively influence policy among the leadership of the countries involved. For now, I'm looking forward to cheering on the young N.K. team in future international play.

Response to: "But it's unclear to me whether such 'diplomacy' between civil society can effectively influence policy among the leadership of the countries involved."

-- It does and it has happened, as efforts by civil society and concerned citizens aimed at inter-Korea reconciliation, exchanges (scholars, religious, cultural..), reunion of separated families have paved a road for governments to follow, as in the June 15 joint declaration and subsequent policies.

Response to: "I guess Jung will be on his way to the forced labor camp now."

-- Jung has South Korean citizenship. It is precisely because of this kind of wild and ridiculous pre-conceived notions about North Korea that precludes meaningful discussions on this issue.

What are the "wild and ridiculous pre-conceived notions"?

Jung is sure lucky to have South Korean citizenship.

I'll ask again: why does this blog make no mention of the human rights abuses?