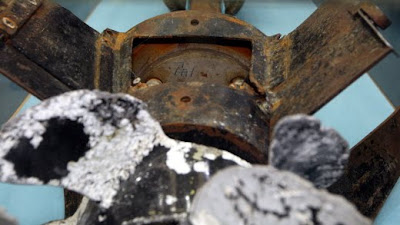 The Lee Myung-bak government of South Korea has released its official report on the Cheonan ship sinking incident, concluding that a North Korean torpoedo sank the ship. Unlike in similar situations of the past, not all South Koreans are believing the government's findings wholeheartedly, as they point out to many unanswered loose ends. See also a video highlighting the questions and doubts.

For one --they say-- is it plausible to believe that a single torpedo from a small North Korean submarine, operating in heavily-monitored South Korean waters, sink a large warship cleanly in half in one single shot, with such high precision, and escape undetected? Moreover, the sinking occurred in the area where South Korean and US navies were enagaged in a joint military exercise, which must have raised surveilllance and monitoring activities at the time. Why did South Korea announce at first that it detected no North Korean submarine movements around Cheonan at the time of the sinking? Has North Korean navy perfected a stealth technology and a precision attack method unknown to the US and South Korean forces?

The evidence presented by the investigative team was a torpedo component with a number and Korean marking inside (photo above). Some observers say that this is incredulous since the magic marker writing seems so pristine compared to the rusty condition of the torpedo part, that one is tempted to say that the marking may have been forged after the recovery of the part (which may have been an old junk part debris that may have been floating in the area).

The timing of the release of the report is a suspect too -- just two weeks before crucial local and regional elections in South Korea that will impact the ruling party's standings for the next presidential election. Often times in the past, incidents involving North Korea were exposed immediately prior to important elections, in order to favor "security-minded" pro-government candidates.

North Korea has denied any involvement in this incident and has warned of war if there is a retaliation, but in an unprecedented twist, it has offered to send its own investigative team to look at the evidences provided by South Korea. It would be interesting how Lee Myung-bak handles this.

There is no doubt about the severity of this incident and its aftermath. All parties concerned must exercise restraint and wise judgment as not to escalate the situation to a "point of no return."

I Agree with your comment and assessment of the situation 100%. Now how can we transmit this information and idea to Obama in White House who seems to blindly agree with 2MB on any and every issue!. I regert deeply I supported his candidacy when he ran for the WH job. He is just another politician. It makes me so sad and make me doubt our political syatem. Moon J. Pak, M.D. KANCC