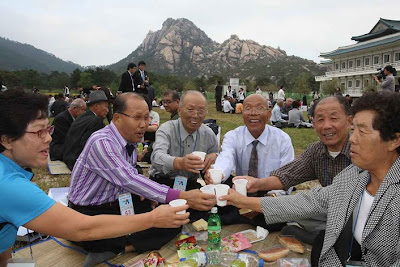 As further indication of souring relations between South and North Korea, inter-Korea travel symbolically ended as North Korea froze assets of South Korean enterprises in the resort area at the Mount Kumgang, which attracted nearly two million South Korean tourists when inter-Korea relations were more amicable during the previous liberal governments of Kim Dae Jung and Roh Moo Hyun (the above photo shows past reunion of separated families at Mt. Kumgang).

Beyond inter-Korea travel, nearly all avenues of official communication between the two sides of Korea are now closed -- a dangerous throwback to mutual suspicians and animosities that will not help resolve the standoff in the Korean Peninsula. Both sides should find ways to resume dialog aimed at repairing relations.