Time to Break the Impasse in Korean Peninsula Security Talks 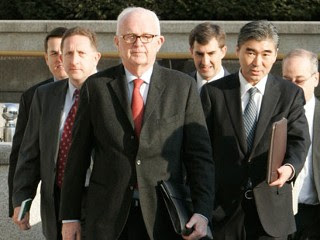 OK, now that "ice-breaking" and "saving face" are done, with the much-anticipated US special envoy Amb. Stephen Bosworth's visit to Pyongyang (photo shows the Bosworth team in Seoul after the NK visit), can we move towards more concrete steps on North Korea's denuclearization and US-North Korea normalization issues? The visit resulted in vague references to agreements on "common grounds" and "positive" movement towards resumption of multilateral talks on denuclearization as well as the stalled four-party talks on replacing the Korean War Armistice to a permanent peace mechanism.

Boosting this somewhat optimistic mood are the signs that other related nations are also moving forward towards reconciliation, as the new Japanese administration is exploring a resumption of stalled talks with North Korea, and inter-Korean relations may see some sign of resuming as North Korea accepted South Korea's offer of anti-flu medicine to deal with an H1N1 flu outbreak in North Korea.

Perhaps these developments will help bring a mutually-satisfactory settlements in early 2010.

I see your blog very well. If you want to add a link to my blog. Please exchange link with my blog. I think that's a good idea. This is my blog, you can see and think about my proposal.
This is my blog :
Make Money Online
Affiliate and Free Traffic
Paid to click - Offers Surveys
The New Online 24/7
Support 24/7 Online
Hot Teen Scandal
Film Online 24h
Teen Asia Hot
Blog For You
Blackberry hot new