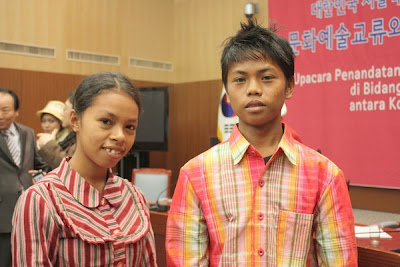 Koreans are proud of their phonetic alphabet hangul, invented during King Sejong's reign in 1443 to help the general populace learn to read and write. Now that innovation and vision have led to a non-Korean group adopting hangul as its official written language. The Cia-Cia, a tribe in Indonesia whose spoken language faced extinction, are learning the hangul writing system to preserve the tribe's language, history and culture. Read more. [Photo from the L.A. Times shows young members of the Cia-Cia on a visit to Korea.]