Another Disgraced Tycoon Gets Freed in South Korea 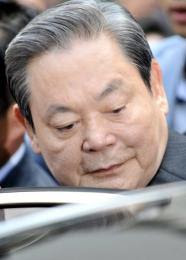 It looks like it takes a "CEO President" (Lee Myung-bak of South Korea, who was a Hyundai executive) to pardon another ex-CEO (Lee Kun-hee of Samsung, photo), who was convicted of tax evasion and embezzlement.

The given reason for this gesture was to boost South Korea's bid for the 2018 Winter Olympics, using Lee Kun-hee's membership (though suspended during his conviction) in the IOC. But this kind of special treatments for Korean jaebol (conglomerate) leaders brings back the fear of unchecked collusion and corruption between the government and the conglomerates -- something from South Korea's tainted past which should not be repeated for a G-20 nation.

Furthermore, this gesture is in stark contrast to politically-motivated, recent indictment of the former prime minister Han Myung-sook.

One has to wonder just how much moral authority a convicted criminal would have as part of a diplomatic effort to secure the next Olympics. No man is that charming, and by now I think bringing Korean prostitutes is old hat for westerners dealing with Korean men who can't bring anything else to the table.