A Thaw in Inter-Korea Relations? 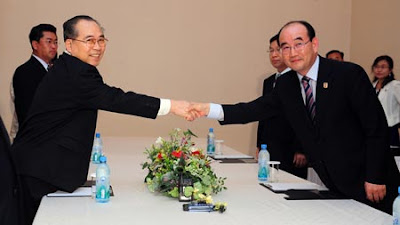 Are these signs of a new thaw in inter-Korea relations? Following the release of two American journalists, the South Korean worker from the Kaesung industrial park detained in North Korea (on charge of defaming North Korea and urging North Korean colleague to defect) was released. North Korea sent high-level representatives to Seoul upon the death of former president Kim Dae Jung, who held the first summit with North Korea. The emissaries met President Lee Myung-bak and suggested willingness of North Korea on the idea of another summit. The Red Cross representatives (photo above) met and agreed to hold another round of reunion of separated family members (due to the division of Korea).