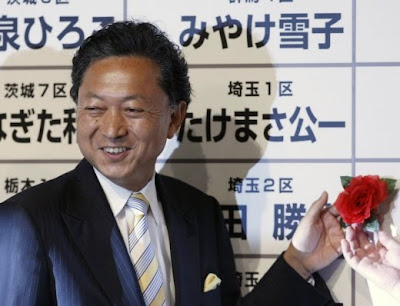 [From the commentary in The Hankyoreh following the Japanese election that brought the opposition Democratic Party in power, with the leader Yukio Hatoyama (photo).]

Korea policy takes up a much larger portion of the foreign policy platform of the Democratic Party of Japan (DPJ) than of the Liberal Democratic Party (LDP).
Since its formation in 1955, the LDP had based its foreign policy upon exclusively dealing with U.S. affairs, but the DPJ’s position has placed a priority on foreign policy in Asia in order to denuclearize Northeast Asia, and the Korean peninsula in particular.
The DPJ’s platform calls for the creation of an East Asian community with the creation of a regional cooperative system in the Asia-Pacific predicated on establishing equal diplomacy with the U.S. As an East Asian community fundamentally involves a push for South Korea, China, North Korea and Japan to promote the denuclearization of East Asia, trust with surrounding nations is of utmost importance. In the long term, the DPJ also dreams of issuing a regional currency similar to the Euro.
The DPJ platform goes beyond opposing visits to the Yasukuni Shrine by the prime minister and other ministers, and calls for the creation of a new public memorial facility. This expresses the will to eliminate the source of friction between Japan and its neighbors during the administration of Prime Minister Koizumi Junichiro. Moreover, in the policy booklet that forms the basis of its manifesto, the party has revealed its position to establish a research bureau in the National Diet Library to study peace issues in order to put to rest post-war issues, including the issue of comfort women. This is something that was inconceivable during the former LDP administration.
When acting DPJ President Ozawa Ichiro was head of the LDP, he visited South Korea in 1999 and became the first minister-level Japanese figure to pray at the graves of independence activists such as Kim Ku, much to people’s great surprise. Ozawa’s image had been that of a rightist and a hawk who advocated that Japan become a “normal country,” but he is surprisingly becoming known as a “liberal” on issues of history.