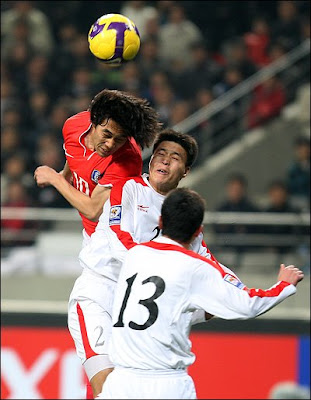 Follow-up to: Both Korean Soccer Teams Within Reach of the World Cup

The much-anticipated inter-Korea soccer match in Seoul today ended with the South Korean team (red uniform)'s 1-0 victory over the North Korean team (white uniform, photo from OhMyNews). South Korea broke the series of tie matches (three) with North Korea in the qualifying rounds for the 2010 World Cup in South Africa. Both teams are positioned well in their group standings and have good chances of qualifying for the World Cup.

The game was played amidst heightened tension in the Korean Peninsula, with deteriorating inter-Korea relations (near-total cessation of inter-Korea exchanges and ventures), the planned rocket launch by North Korea, and the detention of two U.S. journalists in North Korea for illegal entry. The spring is in the air, all parties concerned should refrain from drastic measures or counter-measures and aim for mutually-satisfactory resolutions towards reduction of tensions.