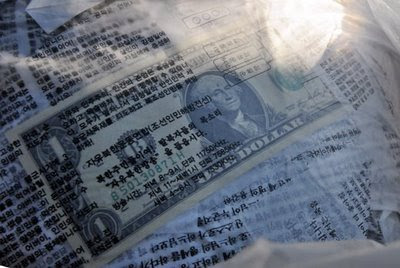 A dollar is included with propaganda leaflets (to entice pickup of the leaflets) stuffed in balloons and sent towards North Korea by anti-North Korea organizations in South Korea. The balloons are at the center of latest controversy and tension in inter-Korea relations as North Korea has cited the balloons as the main reason for its decision to close borders with South Korea and almost curtail inter-Korea exchanges. Yet the South Korean government has not intervened to discourage the ballon send0ffs. Will the balloons derail the decade of inter-Korea reconciliation efforts?