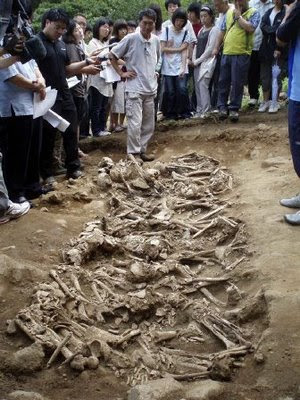 Followup to "Thousands killed in 1950 by US's Korean ally"

By Charles J. Hanley and Jae-Soon Chang (AP) — Government investigators digging into the grim hidden history of mass political executions in South Korea have confirmed that dozens of children were among many thousands shot by their own government early in the Korean War.

The investigative Truth and Reconciliation Commission has thus far verified more than two dozen mass killings of leftists and supposed sympathizers, among at least 100,000 people estimated to have been hastily shot and dumped into makeshift trenches, abandoned mines or the sea after communist North Korea invaded the south in June 1950.

The killings, details of which were buried in classified U.S. files for a half-century, were intended to keep southern leftists from aiding the invaders at a time when the rightist, U.S.-allied government was in danger of being overrun by communist forces.

Family survivors last month met with the U.S. Embassy for the first time, saying afterward they demanded an apology for alleged "direct and indirect" American involvement in the killings. More.