Mao Anying: The Son of Mao Killed in the Korean War 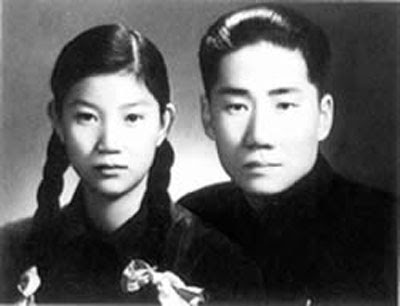 Many perished in the Korean War. Of many foreign forces that fought in the conflict, the Chinese incurred the most casualties (150,000 to 400,000). Among them was Mao Anying, the eldest son of Mao Zedong, who died in combat in North Korea. To Koreans in the South, he was among countless, faceless Chinese soldiers who comprised the Chinese People's Volunteer Army that intervened in the war as the U.N. forces under U.S. command marched towards the Korea-China border. A Korean blogger (in Korean) highlighted Ma Anying's story and found photos of him (the photo above shows Mao Anying and his wife, married one year before he was killed). His mother was killed by the Kuomintang in 1930. Mao Anying is buried in North Korea.