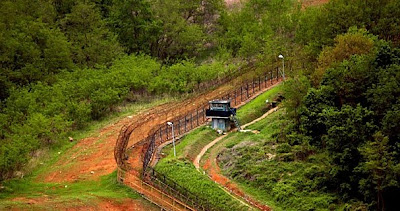 [From The Christian Science Monitor] Just 30 miles north of this pulsating metropolis [Seoul] is one of Northeast Asia’s last bastions of biodiversity. This stretch of wilderness is home to migrating flocks of rare cranes and some of the last wild bears and leopards in the region.
But it’s not Shangri-La or a national park: It is the notorious Demilitarized Zone (DMZ) that divides the two Koreas. Established after the 1953 Korean War cease-fire (the two nations are technically still at war), it is the most dangerous and heavily militarized border in the world.

The de facto wildlife preserve encompasses 390 square miles of diverse terrain virtually untouched by human development for 55 years. Now, as this accidental Eden faces major development pressures, a growing contingent is pushing for its establishment as a transboundary nature park – which could also be a step toward peace between the two Koreas.
Read more.