Protests on US Beef Imports Widens in South Korea 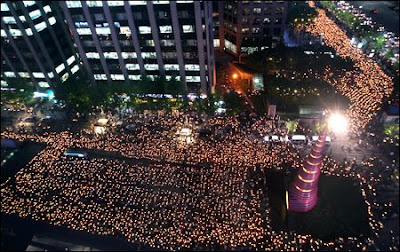 Candlelight street protests have resurfaced in South Korea, participated mostly by younger generations who had stayed away in the recent elections but are now expressing their anger at the Lee Myung-bak administration's handling of the US beef import issue. The impeachment petition has now surpassed one million. Fearing escalation of public outcry, the government has even announced a ban on candlelight protests -- which will likely backfire as a reminder of South Korea's authoritarian past prior to democratization in the 80s.

Here is a coverage from Korea:
Public anger has erupted on concerns over the planned import of American beef this month. Numerous government Web sites including that of Cheong Wa Dae [Presidential office] are being bombarded with Internet users' messages denouncing the decision, even calling it "humiliating and miserable diplomacy.'' The government is afraid that the online boycott campaign might trigger anti-American sentiment it experienced in 2002 when two Korean girls were killed by a U.S. armored vehicle. Several Web sites working to impeach President Lee Myung-bak were recently established for his role of spearheading the imports. The controversial deal has brought down President Lee's approval rating to a record low of 35.1 percent since he took the top job in February, according to CBS. More