Lee Myung-bak in Trouble Over US Beef Import 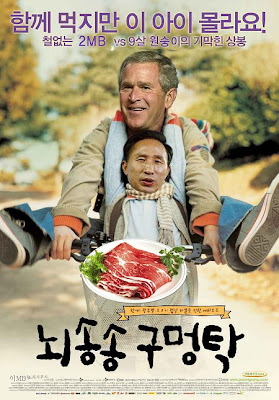 Looks like President Lee Myung-bak got himself in trouble by easing South Korea's ban on beef import from the US, as his support rate sank in recent weeks to 35 percent, and an online petition drive to impeach him (just after two months of administration) has collected more than 680,000 signatures.

Massive candlelight street protests that have ushered in the previous Roh Moo-hyun administration have resurfaced to protest Lee's hasty action, seen as an enticement to Washington for improving chances of passage of the Korea-US Free Trade Agreement.

Photo: a parody of Lee, Bush and US beef, circulating in South Korea.

count down his impeachment