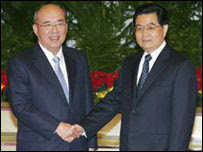 While inter-Korea relations has soured recently, China and Taiwan are moving towards warmer relations:

"The head of Taiwan's ruling party has met Chinese President Hu Jintao in the highest-level encounter since the two sides split in 1949. Kuomintang (Nationalist Party) Chairman Wu Poh-hsiung is in China for a six-day landmark visit to discuss cross-strait transport links. The trip is being seen as another sign of warming ties between the two sides. Taiwan's new president, Ma Ying-jeou, has called for a new "chapter of peace" to be opened." More