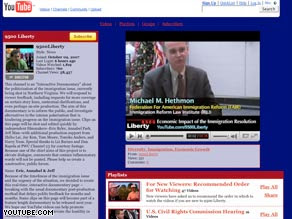 Annabel Park, a Korean-American filmmaker who has helped mobilize voters in U.S. Senator Jim Webb's surprise victory in 2006 and who played a leading role in the campaign for the passage of the U.S. House resolution on "comfort women" issue, is now working on the U.S. immigration issue.

Here is an article from cnn.com:
Equipped with a small video camera, a laptop and a point of view, filmmakers Eric Byler and Annabel Park are trying to influence the heated immigration debate in a suburban Virginia county outside Washington. More