"What Lee Myung-bak Can Learn from George Bush" 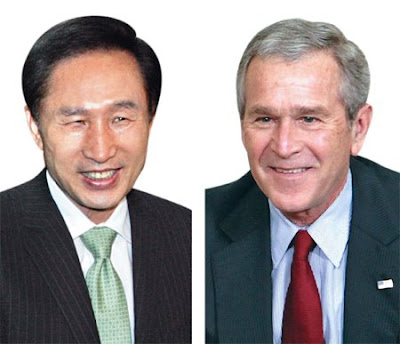 By John Feffer (Feffer is the co-director of Foreign Policy In Focus at the Institute for Policy Studies. This piece appeared in The Korea Times.)

On the occasion of their first summit, George W. Bush should have a private, one-on-one, conservative-to-conservative chat with the new South Korean president, Lee Myung-bak. In this chat, the U.S. president should tell the cautionary tale of how his administration did everything it could to repudiate the North Korea policy of its predecessor ― only to end up in the very same position.

Over the last seven years, the Bush administration took the United States on a long and painful detour in its dealings with North Korea. It started by rejecting the Clinton administration's engagement policy and adopting a harder line against Pyongyang. It continued by scuttling the 1994 Agreed Framework and reducing diplomacy to the level of name-calling. Only after North Korea restarted its nuclear weapons program, produced several bombs-worth of plutonium, and tested a nuclear device did the Bush administration wake up to the failures of its confrontational approach.

When it looked around for an alternative, all it could find was precisely what it had rejected. In a repeat of the 1990s, the Bush administration began to seriously negotiate with North Korea. It started to deal with the country as it was, not as Washington wanted it to be. The resulting agreement, a grand bargain that traded North Korea's denuclearization for energy, the removal of sanctions, and political engagement looked suspiciously like the very Agreed Framework that the Bush administration came into office rejecting.

Lee is about to go down the same bumpy road. In his eagerness to distance himself from the nordpolitik of Roh Moo-hyun, the new South Korean president threatens to undo all the hard work of reconciliation and reconstruction of the last decade. Talk about deja-vu! Like Bush, Lee has called for a review of North Korea policy. He has likewise talked about human rights in a way that holds little promise of actually improving the lives of people north of the DMZ. Both leaders took aim at the institutions of engagement, Bush undermining the Korean Peninsula Energy Development Organization and Lee trying to disband the Ministry of Unification. And both cast the policies of their predecessors as tantamount to appeasement.

Lee's tough stance, so far largely limited to rhetoric, has elicited more of the same from the DPRK. Not only has Pyongyang slipped back into name-calling and threat-escalation mode, it has also kicked out the South Korean managers from the Gaeseong industrial zone and Mount Geumgang and broken off communication with the South. All the potential projects discussed at the last inter-Korean summit ― such as a joint shipbuilding project or the economic zone at the Haeju port ― are on hold. Of course, North Korea, in its perilous economic condition, needs help from the South. But South Korea, too, benefits from these projects, in its continuous competition with China and Japan for a piece of the regional and global economic prize.

Bush, who is familiar with sin, repentance and second chances, can help Lee understand the mutual benefits of engagement. As a born-again engager of North Korea, the conservative president could make a convincing case to his ideological compatriot of the blowback that results from aggressive confrontation.

The timing is critical. The nuclear negotiations are at a delicate point. The United States and South Korea need a coordinated policy toward North Korea. The upcoming summit offers the perfect opportunity to find a common ground rooted in the experience of the last decade. Both the United States and South Korea have learned the hard way that it is impossible to out-shout North Korea in the name-calling game.

When it comes to brinkmanship and hard-line posturing, North Korea can't be beat. It fights best when pushed up against the wall. Only through engagement can North Korea be coaxed to change. This is the lesson that the Clinton administration learned after nearly going to war with Pyongyang in 1994. This is the lesson that the Bush administration learned after escalating the conflict once again in 2003. The question is whether Lee can learn from these experiences before it's too late.

The upcoming meeting of the two conservatives in Washington will no doubt feature a public display of resolve. The leaders of the two mighty countries will seek to demonstrate that they are not easily pushed around by a nuclear-weapon-wielding dictator. After all, they have their own conservatives to appease at home.

But let's hope that in private, they will speak more honestly about the failures of confrontation. Bush has had the foreign policy equivalent of a deathbed conversion. For the good of the Korean Peninsula and the region as a whole, Lee should not wait that long before he renames the policies of his predecessors and makes them his own.