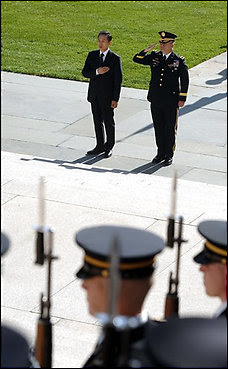 President Lee Myung-bak (aka "bulldozer") will have summit meeting with President George Bush tomorrow at Camp David, where only the leaders of "closest" of US allies tend to get invited. So, did South Korea make the cut into the exclusive club? As if to appease the hosts for this occasion, South Korean authories lifted the ban on US beef imports, placed due to the concerns about the Mad Cow Disease, during Lee's visit to the US.

Lee seems to be preoccupied mainly with trying to sell the Korea-US Free Trade Agreement (FTA) in his US tour, rather than charting and discussing a comprehensive, forward-looking ROK-US relations. In this regard, he should have taken a cue from Prime Minister Gordon Brown of Great Britain, who is in Washington, DC at the same time as Lee and who reached out to the three US presidential candidates for discussions on upcoming policy issues before meeting with outgoing and soon-to-be-lame-duck Bush.

And on inter-Korea relations, Lee played a mere lip service by making a hollow and unilateral proposition on establishing liaison offices in Pyongyang and Seoul, when the relations have plummeted since he took office due to his confrontational stances toward North Korea and open repudiation of a decade of inter-Korean engagement policy.

On the crucial, recent negotiations between Washington and Pyongyang on breaking the deadlock in the implementation of the six party agreement, Lee's government has not been briefed of its details by the Bush administration. Even if that happens, Lee would have no choice but to accept and endorse Bush's engagement policy towards North Korea -- in order to show "strengthened" ROK-US alliance. How would that mesh with his non-engagement policy with North Korea?

Incidentally, former president Kim Dae Jung is also on a US tour at this time, in Portland, Oregon and the Boston area, defending the sunshine (engagement) policy towards North Korea.

Hello. This post is likeable, and your blog is very interesting, congratulations :-). I will add in my blogroll =). If possible gives a last there on my blog, it is about the Wireless, I hope you enjoy. The address is http://wireless-brasil.blogspot.com. A hug.

What is his intention ? Red necks doesn't want a unification and unstable purposedly to keep their privillege.