"Why didn't Bush mention N.Korea in his State of the Union Address?" 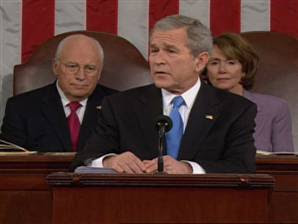 Bush hasn't singled out North Korea in his last two State of the Union addresses. North Korea-bashing is out of fashion these days? Found this in the IntelliBriefs blog:

"MOSCOW. (RIA Novosti political commentator Ivan Zakharchenko) - U.S. President George W. Bush never missed a chance to lash out at North Korea and its leader Kim Jong Il, but he did not even mention North Korea in his latest State of the Union Address." Read more.