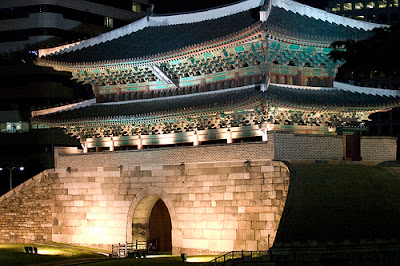 The 600-year-old Namdaemun ("The Great South Gate," the original name is Soongraemun), which survived the Mongol and Japanese invasions and the Korean War, was destroyed in the modern times, possibly by arson.

While Koreans are aghast by the burning of 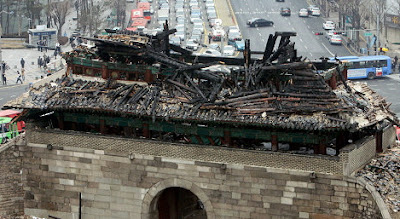 the number-one national treasure, criticisms abound, from government's lack of attention and care of historical and cultural artifacts to the general trend in South Korea of fast-paced modernization and development policy that trumps outwardly show of achievements, wealth and commercialism at the expense of social harmony, safety for citizens, and respect for cultural legacy and identity.
[Followup update: This was indeed a work of arsonist who was dissatisfied with his perceived victimization of the government's land/development policy.]