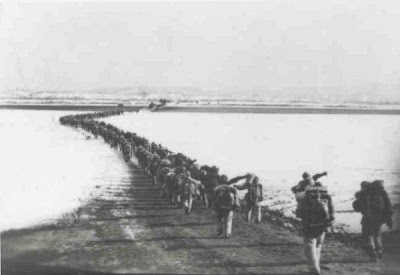 Can you believe... "China has contingency plans to dispatch troops to North Korea should its neighbor become politically unstable." (full report) And, a published US Army article suggests that "The United States should begin creating the diplomatic conditions now to justify and support a South Korean-led occupation of North Korea [to further US interests]. It is no secret too that US military plans for the Korean peninsula include military occupation of North Korea if an outbreak of war occurs.

Whatever the purported intentions of these contingency plans are, they eerily remind of similar instances in the past when the big powers attempted to grab Korea for themselves before the others do at the turn of the 19th century by dispatching their troops to Korea with slightest pretexts. Imperial China sent in its troops as well as the Russan Empire, but it was Imperial Japan which defeated them all to claim Korea for itself. The US, via a stealthy power-sharing deal with Japan called the Taft-Katsura Agreement, gained full control of the Philippines in exchange for Japan's control over Korea.

I'd like to say the story is based on autohypnosis. To fancy things like this may justify brain and money as not being wasted. I just put it in my garbage bag before seeing your post accompanied by the photo that gives fun to the story.

U.S. plans to “occupy” North Korea – OPLAN 5027 in the even of war, OPLAN 5029 in the event of collapse – are actually geared toward securing WMD facilities and sites and some other military sites, while ROKA forces would actually occupy the country. I don’t think comparisons to the 19th century hold up very well.

I believe US OPLANs predate the issue of WMD facilities and they call for USM-run military government in North Korea for the initial phase following a conflict. With USM still having the wartime OPCON (operational control) of the combined US-ROK forces, that is the likely scenario that the US will follow.

Comparisons to the 19th century may be stretching a bit, yes, but I made the comparisons to illustrate big power mentality over Korea -- the thinking of the big power's own interests before the interests of the Korean people.

OPLAN 5027 does pre-date DPRK WMD but has been geared towards securing it should a North Korea attack the South. For some time the goal has been to, “reorganize the country under South Korean control.” Not a U.S. military occupation.

OPLAN 5029 does NOT pre-date DPRK WMD, but was created for in order to prepare for the collapse of North Korea, to include securing WMD, conventional weapons, dealing with refugees, etc.

In both cases (5027, 5029) it is still the ROK troops that will control North Korean territory.

OPCON deals with the warfighting, not the occupation - two different issues.