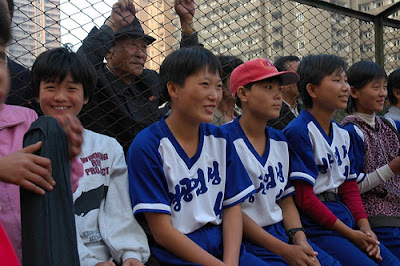 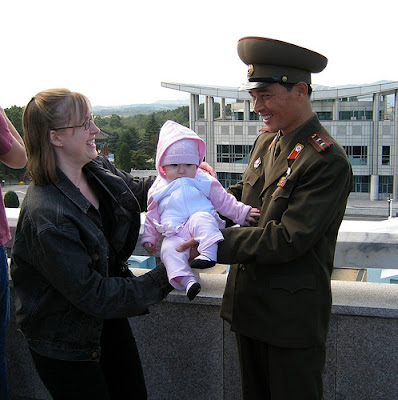 A softball game in Pyongyang (did you know that North Koreans play softball?), with players smiling casually for an American photographer? (check out the jacket with English words) A smiling and trustworthy-looking North Korean soldier holding an American baby for a sightseeing photo, at the DMZ/Panmunjeom area? What would South Korean and American soldiers looking with binoculars on the building (the southern side) in the back make of this?

You won't see these kinds of photos in the mainstream mass media where old stock photos of marching soldiers and military parades tend to predominate, which reinforce only the perceived martial nature of the DPRK society onto the viewers.
Obviously, there is the human/casual side of North Korea that are mostly hidden from us. It takes amateur photographers and global travellers to reveal these candid images. These are from the photo-sharing website "flickr." See more photos of North Korea on fkickr's photo group on North Korea. As more and more Americans and foreigners travel to North Korea, more so recently in the Arirang mass game tour package, they are bringing back candid images of ordinary North Koreans and sharing them with others. And by doing so, they are perhaps fostering better understanding of the North Korean society and its people and leading to people-to-people reconciliation, in conjunction with the official governmental approach towards normalization of relations between the US and DPRK.

Many photos look very nice from American travlers in North Korea, but I cannot image N. koreans inside life through these pictures.
However, I hope N. and S. koreans meet freely and send letters more than now.

Thank you very much for posting.

Of course it is difficult to gauge ordinary life in North Korea by outsiders on brief visits, but these images bring some freshness and candidness that we have not encountered in previously-published photographs. It can also mean that North Koreans are now more comfortable around foreigners.