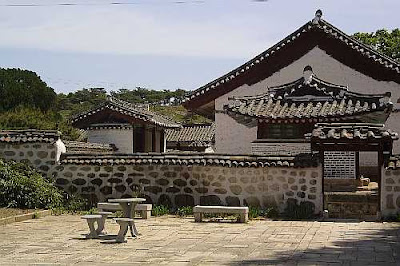 In addition to trips to Mt. Keumgang in North Korea, tourists from South Korea can now travel to the ancient city of Kaesong on group tours. See a video news.

Kaesong lends historical significance to Koreans since it was the capital of the ancient kingdom of Koryo, from which the name Korea derived from. Whereas modern Pyongyang is a symbol of North Korea and modern Seoul is a symbol of South Korea, still-traditional-looking Kaesong projects an image of continuity of the past and the present and perhaps the future of Korea. Kaesong belonged to South Korea prior to the Korean War (being located south of the 38th parallel which divided Korea after the World War II) but went to North Korea's side following the war because the military dividing line agreed on the armistice fell below Kaesong.

Now, Kaesong is a symbol of inter-Korean reconciliation and cooperation, as seen in the Kaesong industrial complex, where workers from South Korea and North Korea work side-by-side. Symbolically, Kaesong can also serve as a historical model of Korean reunification. It was Koryo which reunited Korea after it was split into "later three kingdoms" and brought a strong renaissance in Korean culture, as exemplified in the famous Korean celadon pottery and the world's first metal-based movable type printing press. Perhaps Kaesong can be the future capital of re-reunified Korea?