A Global Perspective on Korean Leadership 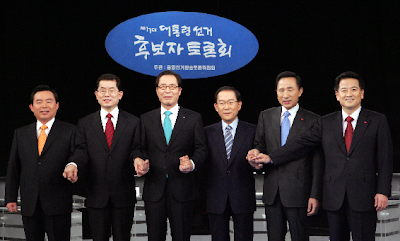 As the presidential election of December 19 nears in South Korea [the photo was taken at the major candidates' debate], here's what an online survey on Korean Leadership by global citizens with interest on Korean affairs, conducted by Jason Lim, a Korean-American columnist, had to say:

"When asked what leadership traits [respondents] wanted to see from the future leadership of Korea, honesty and integrity was number one, followed closely by vision for the future. Rounding out the upper tier were ability to communicate, fairness, intelligence, decisiveness, and ability to collaborate ...