Vietnam, Korea, and the US 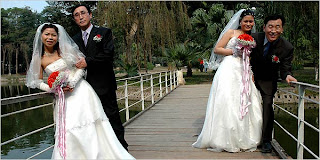 News Item: "The leader of Vietnam's ruling Communist Party is to visit South Korea next week, a month after he made a rare trip to North Korea, as Hanoi boosts ties on both sides of the divided Korean peninsula."

Commentary: Rising out of harsh colonial experiences, Vietnam and Korea were both arbitrarily divided in half during a similar time period in most part due to foreign ambitions, each went through savage civil wars escalated through foreign interventions ... anti-communist South Korean military fought in the Vietnam in support of US forces. And now? Vietnam is at peace and reunified. The US and ROK normalized relations with Vietnam. South Korea is the biggest investor in Vietnam's fast-expanding economy. South Korean bachelors in the countryside marry mail-order Vietnamese brides (photo). Vietnam, which was elected to a non-permanent seat on the United Nations Security Council last month, has said it was willing to play an active role in Korean peace efforts.

Missing items in this brand new dynamics of relations amongst old foes: a permanent peace settlement in Korea, Korean reunification and normalization of US-DPRK relations. (The two sides of Korea are engaged in rapproachement policy that brings the prospect of reunification closer.)

In another development, North Korean Premier Kim Yong-il, who is in charge of economic policy, visited four Southeast Asian countries -- Vietnam, Malaysia, Cambodia and Laos -- from October 26 to November 7, perhaps signaling North Korea's interest in economic models of growth in this region.