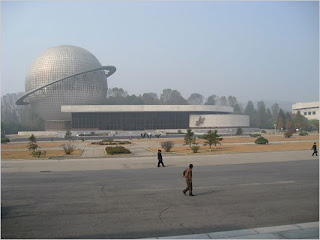 A blog run by the editorial board of The New York Times carried the following interesing piece (With photos by Keith Luse, Senate Staff Aide. The photo on the left is the Museum of Science and Technology in Pyongyang):

"How serious is North Korea about getting rid of its nuclear weapons and forging more normal ties with the United States? It’s always risky reading the tea leaves with this isolated communist state. However, North Korea has begun to disable its nuclear weapons complex at Yongbyon. Now, there is an encouraging new sign that the government may be thinking about an endgame. North Korea recently hosted two senior aides to Senator Richard Lugar, Republican of Indiana — Congress’s leading non-proliferation advocate — for a tutorial on the 15-year-old Nunn-Lugar program, which secures and dismantles nuclear weapons."
It is good to hear news about concrete steps being taken on the North Korean nuclear disarmament issue, rather than seeing repeated rhetoric in the mainstream media. It should be mentioned, that in addition to the issue of nuclear disarmament, Frank Jannuzi, Senator Joseph Biden's Democratic staff to the Senate Foreign Relations Committee, has been working together with his Republican counterpart Keith Luse in a truly bipartisan collaboration in supporting a negotiated settlement with North Korea.