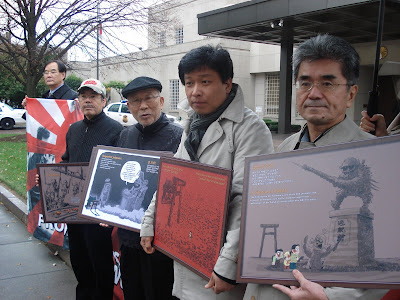 Korea Report News and Photo: A group of South Korean, Japanese and Korean-American citizens gathered in front of the Japanese Embassy in Washington, DC on Nov. 9 to protest the Yasukuni Shrine, which has become a symbol of resurgent Japanese militarism/ultra-nationalism and the attempts to whitewash Japan's past wrongdoings in its wars against neighboring countries in the Asia-Pacific region. Yasukuni's official site states: "War is truly sorrowful. Yet to maintain the independence and peace of the nation and for the prosperity of all of Asia, Japan was forced into conflict."

The Yasukuni Shrine, located in central Tokyo, is dedicated to about 2.5 million people (souls) who have died fighting -- supposedly in the name of the emperor-- in Japan's aggressive, expansionist and imperialistic wars between 1853 and 1945, including the Sino-Japanese War, the Russo-Japanese War and the World War II. More than a thousand war criminals, responsible for brutal mass murders of horrendous nature, including those convicted in the post-WW II trials, have been enshrined there also. Visits by several Japanese prime ministers to Yasukuni, even though the Japanese postwar constitution renounces war, have caused outroar by those countries most affected by brutal Japanese occupation and colonialism.

In addition to the Japanese, 27,863 Taiwanese and 21,181 Koreans are also "enshrined" in Yasukuni. They were the colonial subjects who were forcefully drafted, at gunpoint, to the Japanese army to fight the Pacific War, as Japan tried to fill the losing manpower. In most cases, the families of these deceased have not been informed of the exact nature of their deaths and the families do not even know that their deceased are enshrined in Yasukuni. Attempts by the families to remove the names from Yasukuni have been turned down by Yasukuni officials. A South Korean woman in the delegation that has toured the US to publicize the Yasukuni shrine issue has sued the Yasukuni to remove her father's name. She is aided by conscientious Japanese citizens (four came in this delegation), who --even though most were born after the war-- are working on this issue to redress Japan's past wrongdoings.