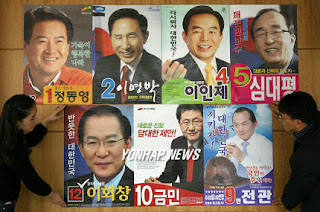 A crucial presidential election in South Korea will take place on December 19. (Photo shows posters of 7 candidates out of 12 who are running.) A key policy issue is the ongoging rapproachement with North Korea.
A possible victory by a conservative candidate, as polls indicate, though it may not necessarily signal a drastic reversal in policy direction, will nevertheless leave unforeseen repurcussions on inter-Korean relations and the six party agreement on the security issues.

If a conservative president gets elected, an asymmetry in US-ROK alliance may develop as it did when President Bush rebuffed then-President Kim Dae Jung's sunshine policy towards North Korea and put a chill on inter-Korea relations as a result. Now the role may get reversed -- it is Bush who may fear that the new ROK leader may unravel the hard-earned peace process via the six party negotiations, of which Bush is trying to promote as a "legacy" to his second term in office. It would be also interesting to see how would-be conservative president would claim to honor and maintain the traditional, strong US-ROK alliance -- a hallmark of conservative forces in South Korea -- if differences with Bush on the North Korea policy come to surface.