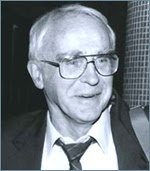 Rev. George Ogle, a long-time advocate for South Korean democracy, labor rights and human rights, has been chosen as one of the "10 Most Remembered Foreigners in Korea," a list compiled by the Korea Times in Seoul. George currently lives in Colorado with his wife Dorothy, a dedicated activist herself, who currently is involved with the National Committee for Peace in Korea, which advocates US policy towards a peaceful settlement in Korea. (See Dorothy's recent article "Moving Towards Peace in Korea.")

From The Korea Times: "Rev. George Ogle was deported from South Korea in December 1974 for his work on behalf of poor factory workers and eight men facing execution because of false accusations that they were communists. Ogle raised awareness that the eight men were tortured in the “Inhyukdang” case to protect innocent people and was deported by the authoritarian Park Chung-hee government. He received the Korean Human Rights Award for his activity by the Institute for Human Rights in 2002. Ogle began his missionary work with his wife in Korea in the 1960s. Realizing the harsh working condition of laborers, he started teaching Korean workers about their rights and how to organize a union."

[The South Korean government overturned the "Inhyukdang" ("People's Revolutionary Party") case recently as having been a fabricated case, with false confessions derived from torture, and has apologized to the families of the executed victims. See Bruce Cumings's piece on the case. -ed.]