A New Role for the United Nations Command in Korea? 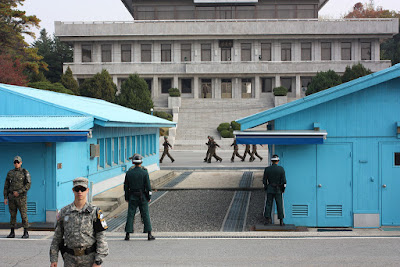 Is there a way for the United Nations Command, a vestige of the Korean War, to play a role in fostering the peace process in Korea? There should be, as it is awkward for the belligerent of the Korean War (the UN Command in Korea, led by US military) to remain unchanged after 65 years, at a time when both sides of Korea are now members of the United Nations. Shouldn't the UN revert to its intended role and be an arbiter of peace settlement in Korea?  READ MORE (article by Tim Shorrck)

The above photo was taken prior to the current warming of inter-Korean relations, when tensions ran high with security alerts at Panmunjeom, situated within the Demilitarized Zone. Now, the scene is much less tense, as the two sides of Korea works to demilitarize the DMZ by demining the area, removing armed guard posts and heavy arms from the area.