The Two Sides of Korea March Again at the Olympics 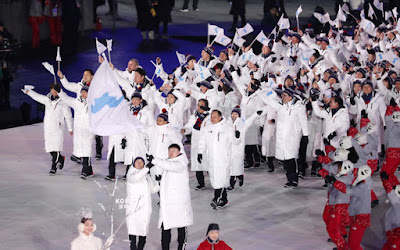 The two Korean teams (South and North Korea) marched together side by side, under one symbolic flag (unifed Korea) at the PyeongChang Winter Olympics in South Korea on February 9, 2018. The last time that the joint entry at the Olympics opening ceremony occurred was thirteen years ago, during the "sunshine policy" period of inter-Korean thaw and cooperation.

Moreover, North Korea seem to have swallowed its pride and is attending the games held in its arch-rival South Korea, together with unprecedented attendance of high-level government/party officials (including nominal head of state Kim Yong-nam and Kim Jong-un's sister Kim Yo-jong) -- perhaps suggesting its flexibility and willingness to resume negotiations for inter-Korean rapproachement. The question is, are Washington and Tokyo willing to seize this apt opportunity to pursue a path of negotiated peace settlement in the Korean Peninsula?

Here at Escorts in Karachi, we have exceptionally proficient women who will make your opportunity as light as the plumes. You can appreciate with them, take them to parties and shorelines and see the better side of the photo of Karachi Escorts.