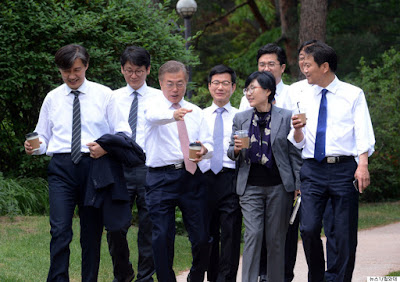 What a difference -- newly-elected President Moon Jae-in of South Korea has vowed to create open, transparent and caring government, work with the progressive and centrist parties and the conservative opposition to promote needed changes, and address pressing economic and security issues. He stopped by at a rally of the Sewol ferry victims families, who were neglected by the previous administration of Park Geun-hye.


Moon announced the nomination of Lee Nak-yon (Governor of South Cholla Province) as Prime Minister and Suh Hoon (who has worked on previous engagement policies toward North Korea) as National Intelligence Service Director and the appointment of Im Jong-seok (former pro-democracy student movement leader) as the Blue House Chief of Staff. The photo shows Moon with his staff, walking in the Blue House compound.