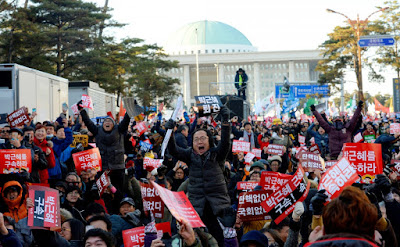 Now that the National Assembly has passed the motion to impeach Park, it is up to the Constitutional Court to decide whether to make the impeachment final in accordance with the constitution. Park will be suspended for the time being as the Constitutional Court deliberates. During this time period, the current Prime Minister, Hwang Kyo-ahn, will serve as the acting president. In order for the impeachment to go officially in effect, six out of the nine judges of the Constitutional Court must agree to rule in favor of the motion within 180 days. And if Park is ruled impeachable, she is to be removed from office and investigated (and possibly prosecuted) for her involvement in the government corruption scandal. Consequently, she would be stripped of privileges normally granted to former presidents including a pension and government-provided security detail.

South Korea can also expect to see a presidential election held within two months following Park’s removal from office if the impeachment motion is approved by the Constitutional Court.