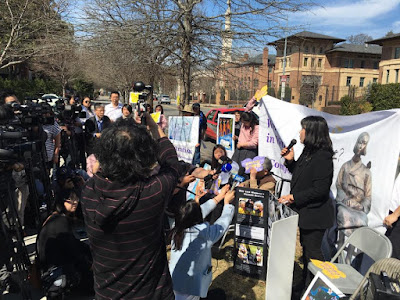 The 1221st "Wednesday Protest" took place in front of the Japanese embassy (special protest in Washington, DC) with survivor and delegation from South Korea on the "comfort women"/military sex slavery issue. The following is the statement from the rally.


We Denounce the Korea-Japan Announcement on the “Comfort Women” Issue

The military sexual slavery (“comfort women”) system perpetuated by the Japanese military during the World War II in Asia was a war crime committed by the wartime Japanese government, and it is clearly sex crime and human rights violation against women (mostly Korean), including minors aged 13 to 16.

To this day, the Japanese government has made statements on this issue which attempt to whitewash its own responsibility and the coercive nature of the abusive system. The recent Korea-Japan joint announcement on this issue does not drift afar from this.

The Japanese government needs to admit the coercive nature of the “comfort women” mobilization as historical accuracy and provide its legal responsibility and direct reparations – only then will there be sincerity in its apology and lead to the true recovery of honor and dignity of the surviving victims.

We also denounce the diplomatic folly by the Park Geun-hye government of South Korea for reaching this agreement without consultation with the survivors, that does not include official apology from the Japanese government, that yielded to the Japanese pressure on possibly removing the statue (which depicts a victim) across from the Japanese Embassy in Seoul, and agreeing to “irreversible” clause that will prevent future settlements on this issue. Many Korean citizens have voiced strong anger and the survivors have proclaimed this agreement as null and void.

In solidarity with the continuing effort of the survivors on this issue, we will continue to push for full and sincere apology and legal responsibility from the Japanese government.

March 10, 2016
Participants of the 1221st Wednesday Protest, in front of Japanese Embassy in the USA