﻿ In South Korea, a Dictator’s Daughter Cracks Down on Labor 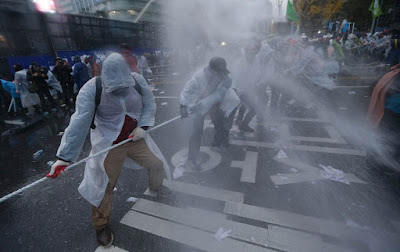 ﻿In South Korea, a Dictator’s Daughter Cracks Down on Labor

By Tim Shorrock, The Nation

Following in the footsteps of her dictator father, South Korea’s President, Park Geun-hye, is cracking down on labor and citizens groups opposed to the increasingly authoritarian policies of her ruling “New Frontier” party known as Saenuri.

The situation could reach a critical point this weekend, when tens of thousands of workers organized by the Korean Confederation of Trade Unions (KCTU) join forces with farmers, students, and other civic organizations in a national action in Seoul to protest Park’s conservative labor, education, and trade policies.

On Saturday, the Seoul Metropolitan Police Agency banned the march, with Park’s Justice Minister Kim Hyun-Woong vowing to “uproot illegal and violent demonstration…no matter how much sacrifice is required.” Meanwhile, the president herself equated the protesters—some of whom wear masks as protection from riot police—to terrorists.  READ MORE.