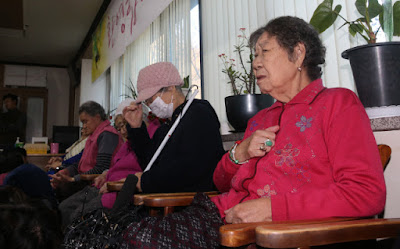 Here is a statement from the South Korean NGO working on the "comfort women" issue on the recent governmental agreement on the issue, citing the absence of legal responsibility by the Japanese government and the lack of Korean government's consultation with the survivors:
----------------

Today’s meeting between the foreign ministers of South Korea and Japan concluded with an agreement on the resolution for the military sexual slavery issue. The survivors of the “Comfort Women” system as well as the Korean citizens sincerely hoped for the rightful resolution on the issue through this meeting, on the year which marks the 70th anniversary of Korea’s independence.

Although the Japanese government announced that it “feels [its] responsibilities,” the statement lacks the acknowledgment of the fact that the colonial government and its military had committed a systematic crime. The government had not just been simply involved but actively initiated the activities which were criminal and illegal. Also, the apology was not directly made by the Prime Minister himself as the official representative of the government but was read by a diplomatic representative, while it was unclear to whom he was actually apologizing. Hence it is hard to believe if it was a sincere apology.

In addition, the announcement specified that Korean government will be responsible for establishing the foundation, despite the fact that Japanese government must be actively involved in follow-up initiatives, including acknowledgement of its criminal responsibilities and legal reparations. It appears that Japan will pass the future responsibilities on to the government of the victims’ country after simply paying off the money. Also, it is notable that the Agreement did not specify anything on preventative initiatives such as truth seeking and history education.
The Korean government’s attitude towards this Agreement, which is vague and incomplete, is rather shocking. The government concurred that this Agreement represents a “final, irreversible” settlement of the issues, as long as the Japanese government is committed to the due diligence in the future. Meanwhile, the Korean government promised that it will seek a resolution for the matter of the Peace Monument in front of the Japanese Embassy in Seoul in order to maintain the dignity of the Embassy, and will limit its criticism against Japanese government internationally. This is a diplomatic humiliation.

The Korean government accepted the Japanese government’s absurd condition on the Agreement which demanded the removal of the Peace Monument. Moreover, the attitude of the former which declared that it will not even mention the military sexual slavery issue in the future is shameful and disappointing.

The Peace Monument cannot be a condition or means for any Agreement. It is a public property and a historic symbol representing the peaceful spirit of the Wednesday Demonstrations, which has been continued by the survivors and the citizens for over a thousand Wednesdays. The Korean government cannot mention anything about the removal or moving of the Monument. While the survivors and the civil society cannot accept the Agreement, the governments cannot push their own agenda. Such an act of arrogation only adds to the pain of the victims even more.
All these years, the survivors, supporting civil society organizations and citizens demanded that Japanese government acknowledge its national, legal responsibilities clearly and commit to due diligence in order to recover dignity and human rights of the survivors and prevent any such tragedy in the future. However, the Agreement today is only a diplomatic collusion which betrays the demands from all.

The military sexual slavery issue must be resolved to bring true friendship and peace between Korea and Japan while more survivors are still alive. However, this cannot be rushed while defying proper principle and common sense.

In 2012, the 12th Asia Solidarity Conference for the Resolution of the Military Sexual Slavery by Japan Issue adopted recommendations for the Japanese government to commit to its governmental, legal responsibilities. In order to make such a commitment actually happen, the Korean Council will continue to work tirelessly with the survivors and the domestic and international civil society.

28 December, 2015
The Korean Council for the Women Drafted for Military Sexual Slavery by Japan
www.womenandwar.net