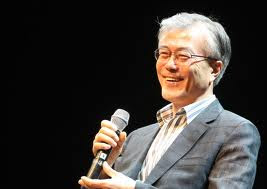 As South Korea prepares for the general election (the National Assembly) in April and the all-important presidential election in December, all political parties across the political spectrum have been busy transforming or merging in order to have bigger impact on the elections. On the ruling, conservative side, the Grand National Party, which has been losing popular support (especially to younger generations) due to unpopular and lame-duck President Lee Myung-bak, has been renamed New World Party (Saenoori Dang) and its platform on North Korea somewhat softened from a rigid, confrontational approach. Its chairperson, Park Geun-hae, the daughter of the late dictator Park Chung Hee, has seen her front-runner approval rating slipping lately vis-a-vis the likely opposition presidential candidates.

On the opposition side, the Democratic Party, which has also been losing support due to its limited support base and lack of generational change, has merged with the Citizens Unity Party and members of the Federation of Korean Trade Unions to become the Democratic United Party (Minjoo Tonghap Dang), with former prime minister Han Myeong-sook as its party leader, thus gaining broader appeal and support from the democratic/progressive/reformist and grassroots citizen's groups. The likely presidential candidate from this camp is Moon Jae-in (photo above), the former chief of staff to late President Roh Mu-hyun.

Another key figure that may influence the outcome of the presidential election is Ahn Cheol-Soo, an independent figure with no declaration of running for public office but who has garnered immense popular support in polls of favorable presidential candidates.

Another possible dimension impacting this year's elections is the first-time incorporation of absentee ballots from overseas Korean citizens-residents, students and public officials. Despite a large number of possible registrants -- due to difficulties in the registeration process-- the registration level has been low and the process is marred by a possibility of fraud in transporting of ballots and difficulty of monitoring. Indeed, the Korean elections of 2012 will be closely watched -- in Korea and overseas.