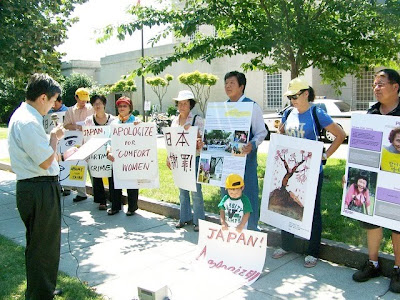 The following is their statement:

This week, Koreans throughout the globe are commemorating the 66th anniversary of Korea’s Liberation Day (August 15, 1945) from the Japanese colonialism.

The reason why we have gathered in front of the Japanese Embassy today is to show our grave concerns on the Japanese government’s continuing refusal to acknowledge its wartime crimes such as the “comfort women” (military sex slave system) issue.

Unlike the German government, the Japanese government still refuses to come to terms with the ramifications of its wartime crimes, but instead pursues teachings of revisionist history through school textbooks that whitewash its wartime atrocities inflicted on civilians of Korea, China, and other Asian countries.

Moreover, the Japanese government has recently provoked confrontations with Korea with the Dokdo Island dispute, disregarding Korea’s historic and sovereign claim to the islands. Koreans painfully remember that one of the first steps taken by Japan in colonizing Korea was to incorporate the Dokdo Islands as its own territory, as a strategic stepping stone towards its territorial ambitions in Asia.