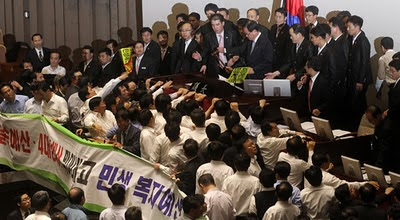 Again, the South Korean National Assembly floor became a scene of chaos as scuffles by legislators and aides arose while the process of approving the national budget was contested, violently. The ruling majority Grand National Party is accused of railroading the budget approval measure without fully going through legislative and committee dialogue/process or accomodating the minority parties' concerns. The controversial "Four Great Rivers Project" budget promoted by the Lee Myung-bak administration was approved in this way, for which the opposition likens to a "legislative coup d'etat." More political tension in South Korea is in store.