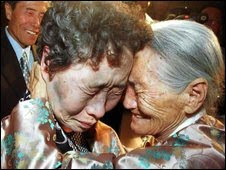 After a long lull, there are signs that the two sides of Korea are willing to talk to each other again. Though not successful, a meeting between military representatives of the two sides took place -- the first in two years. And with some shaky start in negotiations, another round of reunions of separated families is scheduled to take place later this month at Mount Keumgang resort area, with signs of agreement on regular reunions in the future. Also, South Korea sent food aid to North Korea and is allowing resumption of humanitarian aid, which were frozen since the Lee Myung-bak government tied aid to progress in nuclear disarmament issue.

North Korea is in flux as it held party congress amidst signs of eventual political succession to Kim Jong Il's youngest son, Kim Jong Un. Those involved with nuclear disarmament negotiations were elevated to top leadership positions -- perhaps this will lead to resumption of stalled multilateral negotiations on nuclear disarment and security guarantees.