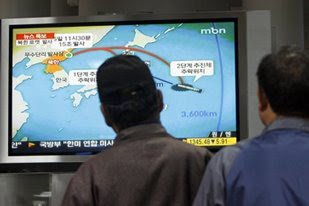 Despite some hopeful signs in the last two years, the Korean peninsula is againteetering toward crisis. The Six Party Talks are stymied. Progress toward normalizing relations between the United States and North Korea has stalled. Relations between the two Koreas have deteriorated.
In this context, North Korea’s rocket launch this week and the overreaction to it threaten to trigger another round of escalation.

We urge all the governments in the region to remain calm and turn to dialogue and diplomacy to stop the peninsula from degenerating into a conflict. We believe that this crisis is a reminder of the absolute imperative of achieving permanent peace in the region.

Frustrated by the lack of progress in the Six Party Talks and genuinely interested in advancing its space program, Pyongyang is making its second attempt to put a satellite into orbit. This time, North Korea has signed the appropriate international protocols governing satellites and given the proper notification. The UN resolution sanctioning North Korea after its 2006 nuclear test does notexplicitly forbid satellite launches. That North Korea is attempting to abide by this resolution suggests that Pyongyang still wants to engage with the international community.

We are concerned about the growing militarism in Northeast Asia, including increased military spending, destabilizing U.S. military exercises around the peninsula, and the bellicose rhetoric from North Korea. Japan has taken the current crisis as an opportunity to accelerate its missile defense programs; South Korea is solidifying its uncompromising position. We believe that an overreaction to North Korea’s rocket launch would only fuel North Korea’s suspicions and make further negotiations difficult. Talk of sanctions would only help end dialogue in the region.

We call on the region’s governments to reaffirm the principles declared in the September 19 Joint Statement of the Six Party talks as well as the roadmap identified in the February 13 agreement. The six countries should abide by their commitments and move forward not only on denuclearization but also with the larger engagement package, which includes a peace treaty to replace the Korean War armistice, concrete steps toward normalization, and a roadmap that Pyongyang can follow to become integrated in the global economy and a peace structure. A narrow focus on non-proliferation is a recipe for prolonged, fitful, and probably fruitless negotiations. Only by expanding the number of options on the table can the Six Party Talks make headway.

All avenues of communication and exchange, including bilateral ones, must be pursued. A bold move to open dialogue must begin now.

I too endorse the joint statement you have so kindly mailed to me. I would urge the Obama administration to continue what Bill Clinton tried to do, that is, open a dialog with DPRK for peace effort. Byong-suh Kim (Ewha University.ret)