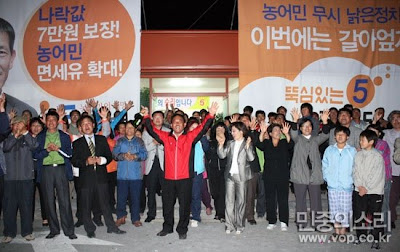 In a clear rebuke to South Korea's President Lee Myung-bak and his ruling Grand National Party (GNP), Korean voters chose all opposition and independent party candidates for the five national parliamentary by-elections. The opposition is becoming diverse as the winners show: one from the main opposition party Democratic Party, one from the Progressive New Party (a recently-formed party), and three independents (including Chung Dong-young, the former presidential candidate). The photo from The Voice of the People shows Chung Woo-tae of the Democratic Labor Party after winning a provincial legislature seat.

Meanwhile in an unexpected political twist, former president Roh Moo-hyun was summoned to Seoul in a prove to determine if he received illegal bribes during his presidency.