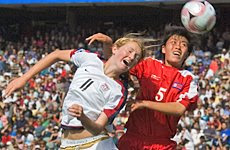 South Korean men's national soccer team has been making headlines in international soccer scene, but on women's competitions, it is North Korean team that has been a dominant player. North Korean women's team won the 2008 FIFA U-17 Women's World Cup, played in New Zealand on Nov. 16, defeating the favored U.S. team.

North Korean women's team also won the 2006 FIFA U-20 World Cup, as well as finishing as a quarter-finalist in the 2007 Women's World Cup in China. North Korean and U.S. women's soccer teams probably had the most interaction between the two countries in international sporting events.