Viewpoint from the DMZ in Korea 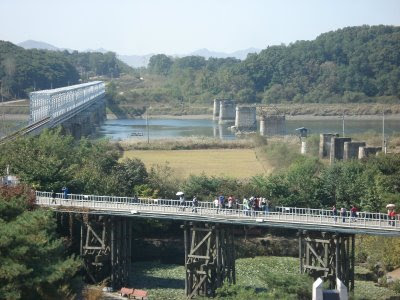 [Korea Report News from South Korea] Standing near the DMZ (Demiltarized Zone) that divides Korea, one gets ambivalent feeling these days. Whereas much progress in inter-Korean reconciliation efforts has been made during the past decade (as covered in this blog), the recent chill in relations brings reminders of past animosities and lingering dangers of continuing division of Korea.

In the above photograph taken at Imjingak, nearest point to the DMZ accessible by civilians in South Korea, the past and future of Korea can be seen. The railroad bridge on the right was damaged and severed during the Korean War, but it was kept intact as a reminder of the war, and as a grim reminder of the division of Korea. The bridge on the left is a working railroad bridge that now connects the two sides of Korea, a concrete product and a powerful symbol of inter-Korean reconciliation efforts. Technically, the railroad track now connects Seoul to London, via Pyongyang and the trans-Siberian railroad. Test runs and short cargo trips to Kaesong industrial complex in North Korea have been made, but the promised regular railroad service between the two sides of Korea has been put on hold due to recent breakdown in inter-Korea relations.

In fact, all of inter-Korean joint activities (tourism, cutural exchanges, high-level contacts), with the exception of joint economic activities at the Kaesong industrial complex, are on hold. This development is unfortunate in light of recent progress in the six-party talks on North Korea's nuclear disarmament and normalization of relations between Pyongyang and Washington, as indicated by the removal of North Korea from the State Department's list of sponsors of terrorism on Oct. 12, 2008.

Disparity in engagement policy with Pyongyang by Seoul and Washington occurred before when the Bush administration snubbed the Sunshine Policy of South Korean President Kim Dae Jung. Now, when the Bush administration has belatedly reversed policy and is pursuing an engagement policy with North Korea, South Korea's new Lee Myung-bak administration is reversing a decade-old policy of engagement with Pyongyang. With the new U.S. administration due in January of 2009, this disparity in policy approach by the two allies needs to be mended to have a coherent policy direction -- preferably towards the engagement approach that may lead to a peaceful settlement in the Korean Peninsula and ensure a lasting peace in Northeast Asia. 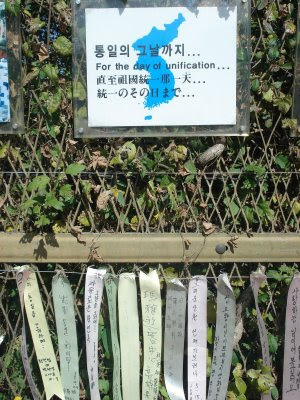 Meanwhile, the Korean people's desire for Korean reunification is apparent in numerous messages of hope and peace left at Imjingak.