A Breakthrough in the Nuclear Disarmament Impasse? 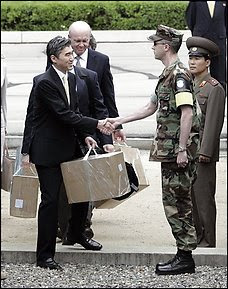 The Panmunjeom (the inter-Korea border village area at the Demiliarized Zone) -- a long symbol of Cold War face-off -- is seeing unusal sights these days.

In this photo, Sung Kim (a Korean-American who heads the Office of Korean Affairs at the US State Department) and his group are hand-carrying boxes containing 18,000 pages of documents detailing activities at North Korea's Yongbyun nuclear reactor, and are crossing the border (the raised concrete slab) casually, and welcomed by US military officer stationed in South Korea.

The documents, detailing North Korea's plutonium program, may hold the key to a breakthrough in the impasse in the implementation of the six-nation agreement on nuclear disarmament and normalization of relations. (Initial analysis of the documents is postive.) Or more precisely, it may lead to improved North Korea-US relations, as it appears that Washington is most aggressively trying to seek a resolution to this impasse. [See also The Right Path With N. Korea by Siegfried S. Hecker and William J. Perry in today's The Washington Post.]