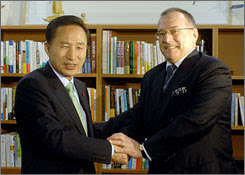 
Commentary: Lee Myung-bak, in his first policy proposal since being elected as the next president of South Korea, has reiterated his desire to see energy development in Siberia, utilizing Russia's natural resources, South Korea's technology and North Korea's labor. Though the motive lies primarily with the South Korean economic gains (his campaign promise) from this venture, the initiative would be in line with regional and inter-Korea cooperation started by his predecessors -- notwithstanding his criticisms of past inter-Korea policies -- such as the Tumen Initative and the Kaesong Industrical Complex project, of which he will find difficult to justify undoing. Moreover, Lee had served as the chairman of the six-nation North East Asia Economic Committee in 1991 and played a role in fostering ROK-USSR normalization. Lee will need to translate economic prospects of regional cooperation into the continuation of detente and rapproachement in the region.