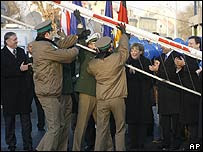 Half way around the globe from Korea, Europe celebrated transnational reconciliation and supranational unity as nine recent members (eight are former Soviet-bloc countries and republics) joined the border-free system.

Is this an inspiration for the divided Koreans? Obviously, the European Union brings together nations with similar market economy and governance. China-Hong Kong relationship may shed some more pertinent parallels for Korea. The two sides of Korea still have a long way to go towards re-integration or reunification, let along the intermediary step of confederation. The beginning phase of inter-Korea exchanges have produced tangible results, now the challenge is to move onto a harder phase of negotiated agreements and implementations towards some form of confederation.